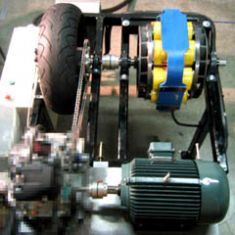 In the pursuit of faster and smoother shifting, Biperformance operates several demonstration vehicles in addition to an engine dynamometer. Designed and built in-house this "dyno" features an electric motor with variable speed control, chain drive, and an electric load controller.

Motorcycle engines are driven by an electric motor coupled directly to the crankshaft. Using advanced controls, the engine's behaviour can be totally simulated without burning a drop of fuel. Computer controlled electric braking means the engine can be loaded to simulate different terrain. Testing gear changes during uphill climbs, off-road bumps, and everything in-between can be done without leaving the shop. Born from the desire to constantly improve, this machine keeps Biperformance on the leading edge of motorcycle transmission control.

Biperformance's beginnings date back to 2001 when new technology was conceived and developed at the University of Waterloo for the FSAE race car project. Building off of the systems initial racing success, a bolt-on aftermarket kit called ShiftFX was first produced and sold in 2005. Over the years several new projects have been initiated to apply advanced control theories to existing motorcycle systems. A strong supporter of off-road racing, Biperformance continues to push the envelope with the introduction of new high performance systems. At the forefront of active control technology for motorcycles, the company strives to ever improve the motorcycling experience.